A real job isn't all it's cracked up to be

Someone asked if I was going to blog the writing process of a project. And as I've long felt it was time to move on from the 'PhD' label, this seemed as good a place as any. This blog has long been an online diary/dumping ground for things that don't fit elsewhere.

Anyone looking for 'proper' theatre reviews go to The Nerdy Theatre  anyone looking for Angels in America work go to Bless You More Life  And anyone who wants to offer me a job please ignore all these and go to my website.

So the archive of PhD related posts will stay up but moving forward I'm no longer writing about Academia, or post-PhD life directly. There comes a time to draw a line in the sand and move on.

Why now? Well firstly let's be honest, that ship has well and truly sailed. I can't say I'm honestly fully at peace with it- the scars of academia run deep after all- but I do feel like I am moving on. I adore teaching, and I really hope some form of it remains in my future, but for now, to quote a 90s classic 'It's not right but it's ok.'

And instead of chasing the impossible dream of academia (please for your own entertainment imagine Michael Ball singing that) I have found myself chasing equally impossible dreams around theatre and writing.

This past Friday I was explaining, in my little spiel I've got down that I was 'taking a break' to write the book, and the play and that after that I'd get back to looking for a 'Proper job'. And for the first time I got a different answer. Instead of an 'oh good, you understand you still have to find a proper job once you have your little writing break dear' instead the person said 'What is a proper job' and 'What if this is your job now'.

And that was a revelation. To have someone also say 'I think you're doing it' is both a revelation and a terrifyig prospect. Really? because my blind panic in the dead of night says otherwise.

Before anyone thinks I'm getting ahead of myself, I certainly don't think I'm going to be supporting myself with writing overnight. I don't think I've "made it" in any sense of the word. Or that I ever will.  But maybe, just maybe I've managed to let it get enough traction that I can let it take priority. For a bit.

Whereas before I was doing writing 'on the side while I looked for a proper job.' Maybe now I do my job 'on the side' while I do my 'proper job of writing'. It sounds like tiny shift on paper. But to wrap my head around it has been huge. And difficult.

Even when given a contract to write the book I've dreamed about writing (and the dream of writing a book) Even when someone approached me, to ask if they could commission me to write the play I'd always dreamed of (and the dream of writing a play). I couldn't let myself believe it was real. Years of being beaten down, told you're not good enough. And hell surviving academia where the default setting is 'You are never good enough'. Surviving academia where anything but academia isn't good enough, made me think I still couldn't acknowledge these for the successes they were. I had to keep thinking of them as 'hobbies' or 'side projects' rather than giving them the time, focus and energy they deserved. I felt that 'well what's the point, because afterwards you'll be back to square one'.

But slowly, I'm starting to think. What if I'm not? what if these are a stepping stone. That lead to other things.

As much as neither pay the bills I am still determined to give these projects the professionalism and dedication they deserve. After all,  I have been professionally engaged to write those. And yet I can't shake the idea that it isn't the thing I actually do. That it is part of my job. Part of this I blame on academia (as I do many things) where a myth dominates that we should be able to pull a book out of our arse while holding down a demanding full time job. Well that's all well and good but I can't job hunt, write a book and work a job to pay the bills all at once.

In the first three months of this year I was trying to: write a book, job hunt, hold down a full time temp job, write a play, start up freelance work, keep up with the freelance work I was already doing, keep up my theatre criticism all the while trying to figure out what my 'Real' job should be.

All that. That's my real job. The other stuff is just what pays the bills.

I'm lucky, I've settled into a job that pays the bills (just) but gives me time to write. Physical time and mental time. So I'm hitting pause on the 'real job' hunt for real this time. A 'real job' will always be there. But if someone hands you your dreams, after so long fighting, you'd be stupid to mess it up right?

It's taken me a while to realise that. But I'm determined not to mess it up.

All of this really was tipped by the fact that actually I have not one but two plays in process now. The wonderful people at Clocktower Theatre are producing my play 'Don't Send Flowers'. And so I have a  book to write, a play to write and a play to re-write. 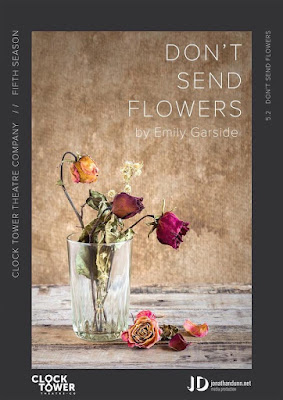 Damnit, I don't have TIME for a 'proper job'.

This blog then is now given over to those plays (the book is blogged over on the Angels blog here). If you're at all interested in the process of dragging those things from the depths of my brain, to the stage...I'll be writing about them here.

Also if anyone is interested in coming up with a title for my other play so I don't have to refer to it as 'Untitled project of AIDS and Gayness' on here I'd be super grateful...
Posted by Dr Emily Garside at 8:22 AM

Dr Emily Garside
Known for being 'Dr Angels' or 'Dr Rent' for my PhD on Angels in America and Rent, I share my research, theatre reviews and other arts related thoughts here.